How To Start An Ecommerce Business In Brazil

E-commerce involves buying and selling products via online services or over the internet. The most important e-commerce market in Latin America stems from Brazil - in fact, it is estimated that the country accounts for about ⅓ of the region's e-commerce income.

So, how can you start your own e-commerce business in Brazil? We will be discussing everything that you need to know about the country and starting your own online company.

The official currency of Brazil is the Brazilian Real (BRL). In comparison, one US Dollar is currently worth just under 5,4 Brazilian Reals in September's 2020. However, this value fluctuates depending on the country's affairs.

As of the start of 2020, a recorded number of 215 000 000 people were found to be living in the country of Brazil. It contains roughly 2.73% of the world's total population, making it the sixth most populated country in the world.

Medium Age Of The Population:

The medium age is used to summarize the age distribution of a population. At the start of 2020, the recorded medium age in Brazil was 31 years. This number has been slowly increasing each year - it is estimated that the medium age will be 36 by 2025.

The population of Brazil is very diverse and features various races and ethnic groups. In fact, the country is said to have one of the most mixed populations in the world. A large majority of Brazilian people can be traced back to three sources: Europe, Asia and Africa.

The population of Brazil is increasing, albeit slowly. The South American country has an estimated growth rate of around 0.72% - this is the 134th highest in the world.

The official language of Brazil is Portuguese. However, the specific type of Portuguese that is spoken in the country is referred to as Brazilian Portuguese. This is because some pronunciations, words, and meanings are different from those of normal Portuguese.

How Do Brazilians Spend Their Money?

Brazilian consumers value product specs and information more than other nationalities. With this being said, they tend to spend a lot of time researching products before purchasing them.

Buyers are normally willing to shop on International e-commerce websites. This is because, similarly to most consumers, they would prefer to shop outside of their countries borders to find lower prices and better products.

There are three other main e-commerce segments that bring the most money into the country. These segments are toys, hobbies and DIY, furniture and appliances, and food and personal care.

How Do Brazilians Pay?

Another very popular way that Brazilians pay for e-commerce goods is by using Boleto Bancario. This is a suitable option for people who would prefer not to enter credit card details online. If you start your own e-commerce business and do not incorporate this form of payment, you will be missing out on plenty of potential Brazilian customers.

Essentially, Boleto is a cash-based payment. Customers are given a barcode that can be used to complete a cash transfer to an online company. The money can be paid using an ATM, post office, online banking, or at a specific bank branch.

How Large Is The Consumer Market Of Brazil?

Brazil's consumer market accounts for roughly twenty percent of the country's gross domestic product (GDP). In fact, the retail and consumer industry is estimated to be worth about six hundred billion US dollars.

The e-commerce market in Brazil generates roughly seventeen billion dollars each year. With that being said, this market is growing every year, due to a number of reasons.

What Are The Main Industries In Brazil?

As of 2020, Brazil's economy is the ninth-largest in the world. More so, it is ranked eighth in the world based on their purchasing power. They are the richest South American country and the second richest country in the Americas.

Brazil has a few major industries that account for the country's GDP.

One of the largest industries in Brazil is the iron and steel production industry. This sector is estimated to be worth roughly four billion US Dollars. Business analysts expect this industry to grow even more over the next few years, which is great for Brazil and it's economy.

Brazil has one of the largest automobile assembly industries in the world. In fact, they produce roughly five million cars each year.

The country generated more than sixty billion US dollars from the automobile assembly industry in 2018. This makes it one of the biggest forms of income for the South American country.

As we have mentioned, Brazil has the ninth biggest economy in the world. This is partly because they have the eighth biggest chemical production industry in the world. The country is perfectly suited for the chemical industry - it is rich in natural gas, oil, and minerals.

The chemical industry of Brazil brings in roughly $113 billion US dollars each and every year. This makes it only the third largest sector of the country. More so, the industry has created about two million jobs, making it a vital factor in its GDP per capita.

Brazil produces about seventy million tons of cement each year. However, this industry is also growing. In fact, it is estimated to be worth about $312 billion US dollars globally.

The Brazilian textile and fashion industry is estimated to be worth about $63 billion US dollars, making it one of their most significant forms of income.

There are roughly thirty thousand companies that are involved in this industry. This creates more than fourteen million jobs, contributing greatly to their GDP per capita.

Other major industries in Brazil include petroleum processing and technology-based industries.

Reasons And Challenges To Expand Your Ecommerce Business To Brazil

As we have discussed, the e-commerce industry in Brazil is pretty big. In fact, they have the largest e-commerce market in the whole of South America.

There are plenty of reasons as to why you should look at expanding your e-commerce business to Brazil.

The GDP Projections Are Always Improving

The Brazilian market hasn't been great over the last couple of years. However, the country seems to have gotten themselves out of that funk as their GDP has begun showing very promising signs.

This is very good for e-commerce businesses. In fact, the market has grown by fifteen percent over the past year, and it is expected to grow even more.

More And More People Are Gaining Access To The Internet

This is why Brazil is such a good investment: more and more people are gaining internet access each year. In fact, about eighty percent of Brazilians are expected to be online by 2023.

Social media is one of the best ways to advertise your e-commerce business. This is yet another reason why Brazil is such a good investment: social media is a huge phenomenon in the country.

Extra content: Email Marketing or Social Media Tools: Which One is Best for Your Global Online Store?

As of 2020, roughly 142 million Brazilians have social media accounts. More so, this number is increasing rapidly - it has a growth rate of just under four percent. This means that your e-commerce advertisements will potentially be seen by more than sixty percent of Brazil's population.

As we have already discussed, Brazilian shoppers have no problem with buying goods on international e-commerce websites if it means that they can save money or find better quality products. In fact, roughly fifty percent of the people in Brazil claim to have made a purchase from a foreign e-commerce company. Some of the top e-commerce sites in Brazil are international, but Brazilians prefer to pay with local payment methods.

There Are Plenty Of Digital Banking Options

There are plenty of easy ways in which you can receive your money from Brazil as an e-commerce company owner. We have mentioned EFTs, online banking, and alternatives such as PayPal.

Brazil has recently seen an increase in digital banks. This gives e-commerce merchants plenty of payment options, which makes buying online much easier and more convenient for customers. They won't hesitate to purchase goods via an e-commerce company if they are comfortable with the payment method.

We have discussed why it is a good idea to invest in expanding your e-commerce company to the South American country.

Brazil has a total population of 215 000 000 and a population growth rate of 0.72%. Their medium is 31 years old. The Brazilian Real is the official currency of the South American country. Their main language is Portuguese, and the population of Brazil is very diverse.

Brazilians tend to spend their money on experiences, such as traveling, electronics, and beauty products. However, they also invest their incomes on toys, furniture, appliances, and personal care items.

There are various reasons why you should look into expanding your e-commerce business to Brazil. However, there are also a few challenges that you will face once starting a business in Brazil. 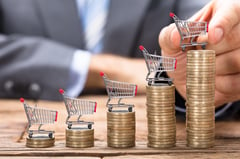 Ecommerce Business: The Only Guide You'll Ever Need

Summer, the Hottest Selling Season for Ecommerce in Brazil