Latin America was the fastest-growing e-commerce market in the world in 2020, with a 36.7% growth, according to research from e-Marketer. Every day new tools are created with the goal of making modern and easy payment alternatives which ultimately increases inclusion and moves the economy forward in Latin America.

Buy Now, Pay Later solutions (BNPL) and e-wallets are both examples of this phenomenon in the region and have been changing the Latin American consumer behavior as well as how they can affect the usage of traditional card transactions in the future.

Thus, aiming to go deep on the understanding of these two prominent payment methods in the region and how they are changing customer behavior, we spoke to the following experts: Christina Cacho, of Kueski, Daniel Vallejo, of Addi, Amanda Jacobson, of Oyster, and John Price, of Americas Market Intelligence (AMI).

It is time to say hello to e-wallets and BNPL solutions, so let us show you!

What is a BNPL?

BNPL is a financial solution that allows consumers to make their purchases and pay for them overtime. Unlike a credit card or a line of credit issued by a bank, BNPL allows consumers to pay via short-term loans that have no interest fees for shoppers in most of the cases. The micro loans are approved at the time of purchase and there are two primary ways of borrowing it.

The first is a point of sale loan, which the BNPL provider partners with a merchant offering financing at checkout. The other is an installment plan that allows people to buy online and pay for their items in a predetermined number of installments.

It is important to notice that in some cases the point of sale loan does not charge the shopper any interest, so the merchant is charged a transaction fee. In other cases, there are no charges for the merchant side and the consumer receives the loan to get the product right away. This way he/she pays for it over the course of several months with an interest fee.

BNPL is a relatively new concept in North America and Europe, but is very common in LATAM.

The solution is a win-win opportunity for both the merchant and the shopper. See below the advantages for each side:

- It increases the reach of their audience since, for example, shoppers that don't have access to traditional payment methods can benefit from it.

- It boosts cart conversions and a higher sales volume through a better shopping experience.

- It reduces the risk of default or frauds since BNPL providers check the customer’s customer’s ability to pay through their own soft credit checker underwritten process.

- It gives access to online products/services to people that don’t have credit or debit cards, or simply fear to disclose their card information on the internet.

- If used in a disciplined manner, it provides a good predictability of expenses spread overtime to address an immediate need.

Behind BNPLs success in LATAM

Paying with installments is a common and popular way in LATAM that has been happening for over 30 years. Amand Jacobson, COO of Oyster Financial - a digital financial platform for small and medium-size businesses - believes that the main reason for BNPLs popularity is because it offers inclusion to people. She states that since credit cards and installment payments often require a traditional bank system, half of the LATAM population are excluded from these possibilities. BNPLs, therefore, are there to fill this gap, but how?

In order to have a practical example of this phenomenon, we spoke to Christina Cacho, the CMO of Kueski. The company has been driving the BNPL boom in Mexico and became known for its Kueski cash product, which is almost a real-time loan focused on the Mexican middle class and the main player of BNPL in the country. It has, nowadays, granted 3.4 million loans for more than 580,000 unique customers so far and it has helped almost 1,000 regional partners. So, from Christina’s point of view, BNPLs focus on consumers that don’t have credit cards, or are living in countries with low credit card acceptance/availability.

Another great example of this BNPL success is the Colombian-based company Addi. Considered a technology company that seeks to promote and enable digital commerce in LATAM, it has raised $65 million to fund its Buy Now Pay Later (BNPL) growth and grew its business over 5 times since the beginning of the year.

According to Daniel Vallejo, Co-Founder of Addi, three factors explains the success of BNPLs in the region:

1. BNPL is a democratic payment solution: BNPL fits emerging markets very well because it is a solution that attends people that already have access or have a credit card and rather use BNPL, and also gives access to people that do not have a way to pay digitally, either because they don’t have a credit or debit card that can be used to pay online.

2. BNPL focuses on user experience: traditional programs that offered installments in LATAM, which is mainly credit cards or standard point of sale financing providers, have never been focused on user experience. Through traditional methods, the process before and after getting underwritten has always been very fractioning. So, actually, creating a product that has a priority of a greater user experience, gives to BNPL service providers a very relevant tettinger.

3. BNPL helps merchants increase sales: BNPL offers installments, but differently from other solutions, it is focused on improving conversion or increasing merchant sales. Thus, BNPLs are much more than just a financial payment instrument.

Jhon Price, Managing Director from AMI, the leading market intelligence and research program in LATAM, concludes this BNPL’s scenario stating its importance for the Latin American middle class, which varies to 15% to 30% of the marketplace (depends on the country). The reason is that, in many cases, it is uneasy for banks to issue credit cards to everyone, and since BNPL providers are more innovative and open minded on how they measure creditworthiness, they end up grabbing a significant share of this demographic.

E-wallets represented 11% of the region’s e-commerce volume in 2020 and are expected to make 33 billion dollars in transactions in 2021, according to AMI forecasts. According to Beyond Borders, an EBANX annual study of e-commerce in LATAM, almost 75% of purchases from digital wallets are made from new customers. Thus, just like BNPLs, e-wallets are a heavyweight protagonist in LATAM's e-commerce, being an alternative payment method that is here to fill the gaps left by traditional methods while providing more access to people.

Just as an example, Beyond Borders study showed that Chile increased 32% in digital wallets payment volume last year, followed by Colombia (20%). When looking at Argentina, the method already represents a surprisingly 30% of its e-commerce.

Finally, In addition to that, the investment consultancy Buyshares indicated that Brazil is already the world’s fourth-largest market for mobile wallets, while Globo Market Intelligence showed that 61% of smartphone users have at least one of them.

You have seen a few indicators of how the LATAM payment scenario has already gone digital. In a region where digital transactions have been historically handled by a large unbanked population, frictioned payments and gaps in connectivity, BNPL and digital wallets are increasing their presence.

The numbers shown here will not go down despite the prolonged impact of the pandemic and digital boom in some industries. However, the key takeaway here is that e-commerces became one of the most important channels of consumption to embrace innovations in payments and changes in the shopper’s behaviour.

Don’t miss our 2021-2022  Beyond Borders Study: How digital payments and e‑commerce are gaining traction in Latin America - free study! 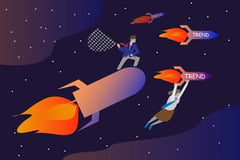 The Major e-Commerce Trends for Latin America in 2021

The consumption behavior is changing and it is opening space for a lot of entrepreneurs to invest, the numbers are only growing. Learn more. 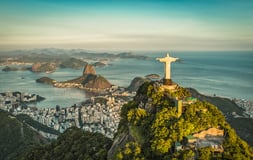 Offering local payment methods is a solution to successfully convert the traffic that’s being driven from Brazil on ecommerce stores into sales.

Why Your Business Should Start Exporting

Is it the right timing for your business to start expanding across borders? Understand why exporting is the new trend for e-commerce stores!